Shop Amazon - Give the Gift of Amazon Prime 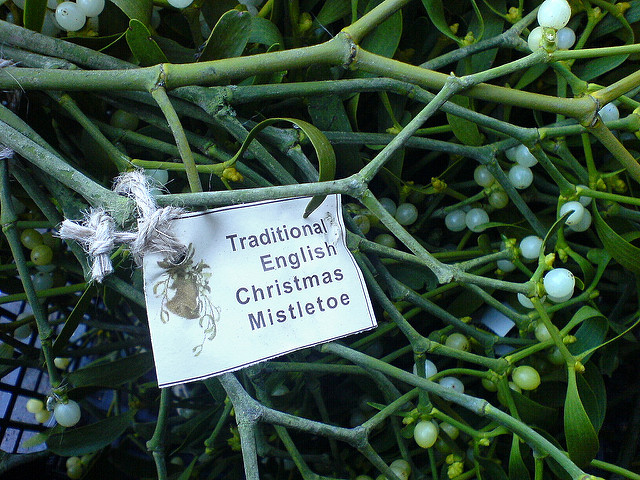 A tradition in Merry Olde England was to harvest bunches of mistletoe which grows in trees and weave them into Yuletide decorations. American are familiar with the sprig of it hanging in the doorway of a room, but have little idea of what the plant is, how it grows or even what it's origins and meaning as a holiday decoration.

We do get that "kissing" is involved.

"The druids revered mistletoe (and the oak tree) and used it to announce the new year. Because of its pagan associations it is not used by Christians to decorate churches.

It is also associated with fertility and conception, which is one reason it is used for kissing under. There is a strict etiquette involved, which entails a man removing a berry from the plant after each kiss; after the last berry has been plucked no more kissing is allowed. But this tradition seems to have been lost in time."

People like the idea of a Mistletoe kissing ball, but few know the meaning, and I certainly had never heard of the custom concerning the berries.

Not native to the USA, Mistletoe lives off a host plant. For most who like the look of the white berries and the ovoid shape leaves, artificial ones are popular. Another reason to avoid the real ones is the fact that they are toxic

Details
Category: Around The World
Hits: 2013